Top of the South Island pops

In the past six months house price growth in Nelson Tasman has been consistent across the board, but lack of supply is now putting pressure on rises, writes Sally Lindsay 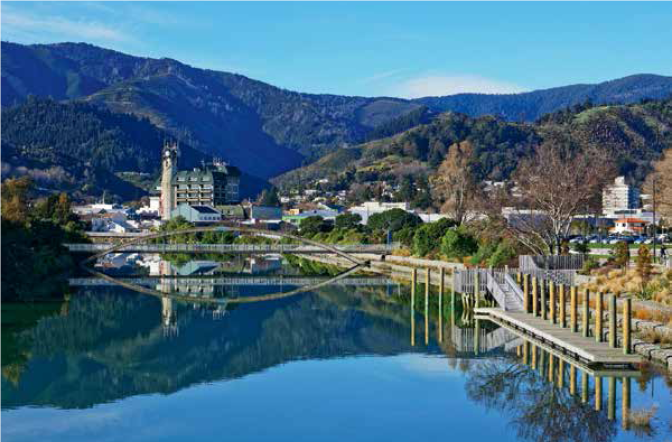 Despite a tendency towards political conservatism and a high number of retirees and rest homes, Nelson and the Tasman region still live up to their popular perception as an arty enclave of sun-obsessed semi-hippies with a strong community heart.

Nelson is the third-most ethnically diverse place in New Zealand. In the 1970s  hippies were attracted to rural Tasman Bay and Golden Bay by cheap land prices. Since the 2000s different types of lifestylers – wealthy people from Germany, the US and other countries – attracted by the climate and environment have bought coastal land in the area.

There has been rapid growth in coastal areas such as Kaiteriteri and rural Waimea – around Richmond, Wakefield, Brightwater, Māpua and Wai-iti. Motueka and Nelson city have had reasonable growth – much of it driven by internal migration.

This has led to house prices surging in line with the rest of the country and the median price for homes within the most popular Nelson suburbs is $640,000, a rise of 12% in the past year and three-year growth of 29%. In Tasman’s most popular areas the median price is $720,000, also an increase of 12% in one year and growth of 30% over three years, according to data from real estate agency Ray White.

Generally, Nelson has a preponderance of the older houses while the newer suburbs are in Richmond, Waimea, Wakefield, Motueka and Brightwater, where most of the development is taking place.

February’s REINZ data shows Nelson, with a 43.5% drop in inventory, was third amongst the regions showing the biggest percentage decrease. Tasman’s listings dropped 17.9%.

Cooper says as long as there continues to be a lack of available properties and the cost of building new homes continues to rise, he doesn’t see prices adjusting any time soon.

About 550 new houses a year are being consented in Tasman. However, he says many investors are considering their options in light of the Government’s plans to scrap mortgage interest tax deductibility, the changes to the Residential Tenancies Act coming into force, plus talk of rent freezes and other restrictions.

“Some are looking at selling older stock and replacing it with new builds as the tax rules are exempt in this space and the yields are similar when you take into account the changes.

“This may see an increase in stock coming to the market over the next few months, however the market is consistent year on year with sales volume. This is not a new problem, it is just a bit more pronounced than usual,” says Cooper.

Properties are attracting multiple offers, often with five to eight bidders – investors and owner occupiers vying for the limited stock. Houses sold by deadline sale, tender or auction are achieving on average 5% higher than those sold with a price, he says.

Summit is the biggest rental agency in the region, managing 2,000 properties and the low number of vacancies has been the case for the past 18 months. The firm has just 10-20 vacancies and big numbers turning up for viewings of rental properties.

However, the rental agency is still attracting investors with properties to rent and 32 were added to its list in February alone.

Families are attracted to Stoke and Richmond for schooling and in both Nelson and Tasman three to four bedroom houses are the most popular choice. “Couples and families are the bread and butter for the rental sector as Nelson is not a big student city,” says Henry.

He says the exact figures for rent increases over the past year are not easy to define, but in January they rose about 4-5%.

“It is obvious they will keep rising with the tax deductibility issue hitting investors. “It’s an odd thing for the Government to pick on a particular market to try and supress it. When the loan to value ratios (LVRs) were introduced that was effective in slowing down investors buying more stock, but the scrapping of tax deductibility is a

bitter pill for them to swallow.”

WHERE TO FOR INVESTORS?

Intensification has to be the way of the future for Nelson, says Glenn Morris Nelson Property Investors Association secretary.

Everyone talks about it, but there are few options being offered by the Nelson City Council.

It has made it difficult to build blocks of flats for a reasonable price. Most of the existing stock was built in the 1960s-1970s and while some older buildings in the city are being bowled they are being replaced with two-three level apartment blocks, with each apartment selling for $1 million, making them unsuitable for renting.

“Investors want renters and renters often want walk-in and walk-out properties. They don’t want land with lawns to mow and gardens to look after, they just want to go inside and live their lives.”

He says that means apartments. “People are crying out for them and investors want to provide renters with what they want and make a bit of money in the process.

“Investors will be pushing the council to put plans in place for intensification, particularly as they will be new developments and Government plans to scrap mortgage interest tax deductions against income will not apply to new builds.”

Morris says most of the new builds in Tasman are house and land packages. “In Richmond West, the biggest development area, there are no sections to build on, they have been bought by speculators and investors. Packages are being sold for about $700,000, and if a new property is bought by an investor it will rent out for about $600-$700 a week.

Older properties in Nelson might end up costing an investor $7,000 a year more in tax once the Government’s four-year phase in of the new tax deductibility rules ends. “Investors can’t put the rent up to cover that. People in the investment game buy and expect to make some profit. On the basis of the tax changes it will be hard  to survive for many investors.”

He says on top of the new government rules, banks are tightening up mortgage lending. He had personal experience a few weeks ago when an eight-property trust the family has went to buy another house.

“The trust has debt of 25% against the properties and $100,000 in profit, but the bank turned down the mortgage application because it was unhappy about his daughter’s income. It said I could apply but I am not interested in my mid-70s.

“It is very difficult for investors when the banks and government are tightening up but new builds and apartments brought about by intensification could be the saviour.”

Nelson Property Investors Association holds regular events and is a great source of information about the Nelson Tasman market. 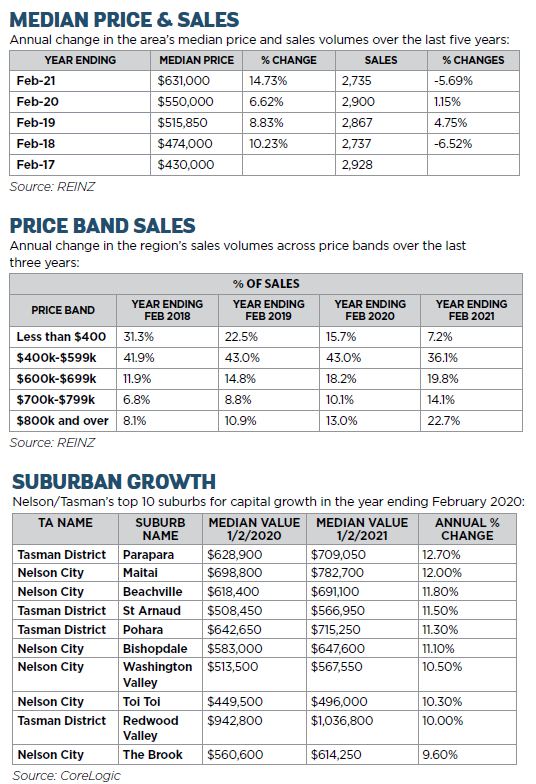