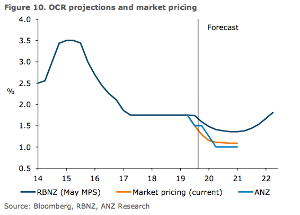 Why bank changes are good for advisers

Westpac loan process gets the thumbs-up

Economists at one of New Zealand's major banks believe lending rates could get even cheaper by the end of the year.

ASB economists predict a "new record low for the OCR awaits", based on the current balance of risks in the economy. They believe the next RBNZ cut will come in August, with rates then on hold at 1.25% until 2022.

In an update to the market, ASB economists pointed to comments made by RBNZ member Christian Hawkesby last week.

Hawkesby said New Zealand has to "be ready to adapt when changes beckon”, and said the central bank has “further room to provide conventional monetary stimulus if required (using the OCR)”.

Financial markets are also pricing in the likelihood of a further cut. Overnight indexed swaps, a key indicator of where investors think interest rates will go, are pricing cuts of 30 basis points in New Zealand by the end of the year.

The markets expect the Reserve Bank to make another move following the decision to lower the OCR by 25 basis points in May.

The growing expectation comes as global central banks shift to an easing bias. Last week, a US Fed official said a rate cut could be "warranted soon" in America. While the Reserve Bank of Australia cut interest rates to 1.25% last week.

ANZ economists said the RBNZ should not "save its bullets" and wait until a global crisis hits. "If cuts are needed, best to stimulate the economy now," the bank said. ANZ predicts the OCR will fall to 1% in 2020.

Westpac economists said nervousness around the global economy and shifts towards rate cuts overseas had caused New Zealand markets to price in a cut. Westpac believes rate will stay on hold for the rest of this year, however.

Michael Gordon, economist at Westpac, said last month's OCR cut was evidence of the central bank "getting ahead of the game". He told TMM Online that Westpac did not expect further easing in 2019 as the economy had performed better than expected in recent months.

Either way, a golden age of lending rates look set to remain. ANZ and Kiwibank cut two year rates to 3.85% on Monday, joining a host of other lenders with sub 3.9% offers.