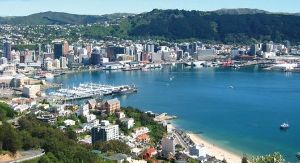 Remember Auckland’s “halo effect”? Well, it’s happening again but this time it’s at play in the Wellington region as the capital’s market powers along.

For Trade Me Property head Nigel Jeffries it’s an example of the ongoing strength of the capital’s property prices, which haven’t dipped since 2015.

He says the Wellington market has been the country’s quiet achiever as while Auckland hogged the headlines Wellington has been increasing considerably in the background.

As for that “halo effect” - Jeffries says that much like Auckland, Wellington’s prices have been spreading from the middle out.

Jeffries says that average asking prices generally slow down as buyers and sellers retreat for the winter, but buyer demand is still very high in Wellington.

“That’s despite the way prices in the Wellington region are going and there are also more houses on the market than this time last year (up 7.6%) and interest rates are at all-time lows.

“It will be interesting to see what the winter Wellington property market looks like later this year. Every indication we’re seeing is that it will buck the seasonal trend and continue to grow.”

In other markets, the property market picture was not quite as rosy, according to Trade Me Property’s data.

In Auckland, the average asking price dipped for the first time in nine months. It was down by 0.5% year-on-year to $925,800 in April.

Jeffries says Auckland’s market is in a state of flux, although the apartment sector remains strong with the average asking price for an apartment up by 14% year-on-year to $706,000 in April.

“Overall, it’s an interesting time for sellers: they’re seeing dips for the first time in a long time, the market feels more volatile than it has for many years. Demand is there but buyers are unwilling to offer the sums they were throwing around a year ago.”

But regional markets returned a mixed bag of results in April with some seeing double-digit growth, and others experiencing little to no change.

Otago saw its average asking price increase by 13.6% year-on-year to $585,550, alongside a growth in demand as demonstrated by a 19% annual increase in the average number of views for listed properties.

Other regions were not doing as well, with property prices in Marlborough and Taranaki slowing considerably when compared to the same time last year.

But Jeffries adds that with the OCR cut and record low interest rates, it isn’t just Wellington that could see an unusually busy winter.

“With interest rates at an all-time low and the capital gains tax off the table, we expect a boost for the housing market and we will likely see even more buyers in the second half of 2019.”

On 20 May 2019 at 11:49 am John Butt said:
Please stop quoting Trademe. I like reading your posts, but this is a waste of time. Trademe are only quoting asking prices and we all know asking price and settlement prices are not necessarily even related!