Auckland’s North Shore has a reputation as a cruisy place, with its pōhutukawa beaches and sparkling seas. It’s been an area with big houses and bigger backyards, with elite seaside suburbs such as Takapuna housing some of the country’s rich and famous.
Along with the rest of Auckland, North Shore has experienced phenomenal growth over the past few years. In the past 12 months, many North Shore suburbs have increased in value by upwards of 15%. Much of this growth has been driven by investors and developers looking to cash in on the demand for property in Auckland by utilising Unitary Plan changes that allow for intensification. Where one house on a 1,000m2 section used to be the norm, the plan changes now offer investors the chance to develop five or more smaller homes in its place.
“The change to mixed housing zone in many areas of the North Shore, plus the huge increases in capital gains, have been a big driver in the market,” says Dan Manford from Barfoot & Thompson Glenfield.
He says that investors are snapping up anything with development potential, and this is having a flow-on effect to the rest of the market.

Sure, it’s a cliché, but North Shore exemplifies the hackneyed “city of sales” moniker. It’s booming, and the stats prove it. According to CoreLogic data, the top ten suburbs have experienced a price increase of between 10%-16% from February 2020 to 2021. And many of the suburbs leading the charge are those that have the best development potential.
Sunnynook leads the charge with a year-on-year increase of 16%, from $997,300 to $1,156,700. Hillcrest is close behind, up from $1,058,400 to $1,218,050, a rise of 15.1%. Beach Haven is up 13.7% from $912,000 to $1,037,100 and Glenfield is up 13.4%, from $898,600 to $934,350.
Manford says that Glenfield and surrounds are very “investor heavy” suburbs. But when he began as manager of the Glenfield branch of Barfoot & Thompson, the interest was far more muted.
“When I started working in Glenfield it was on the verge of the foreign buyer ban, there was talk of capital gains tax (CGT), and the anti-money laundering laws were coming in,” he says. “This resulted in a cooling of the market and affected the sales volume.”
But as interest rates dropped, the CGT didn’t eventuate, and the implications of the Unitary Plan changes started to sink in, the market began to buzz.
“We are seeing a lot of investors buying properties with large sections either as land banking or for development,” says Manford.

Houses in suburbs like Sunnynook and Wairau Park (in double Westlake zones) are particularly popular. These can attract good rents while investors wait and see what the land value does; or they can be developed in the knowledge that they will easily sell to buyers seeking good zoning.

Rachel Pole is a property manager at Lochore’s Birkenhead. She says that there is a big investor market on the North Shore and good demand for properties. However, the past few months have been quiet, as Auckland goes in and out of lockdown and renters hold on to their properties.
She says that there are a range of demographic types interested in renting in the North Shore.
“Families are interested in good school zones, especially Westlake Girls and Boys. Then you get professionals who work from home and want a place with a sea view in Takapuna. We also see a lot of professional couples who want to live here.”
Another trend she has started to notice are extended families renting properties together: “Five or six bedroom places are starting to be very popular with larger families as they seek to lower how much they each pay in rent.”
She says that two-bedroom homes in places like Birkenhead are likely to fetch between $550-$600 in rent; three bedroom homes not near the beach will be in the $600+ category; with larger homes anything between $800 and $1,250.

“But anything by the beach with a view will be at the higher end of the price range,” she says.

East Coast Bays, formerly a sleepy seaside area, is also growing in leaps and bounds. Bob Voss from Barfoot & Thompson Browns Bay says that any sites upwards of 600m2 are being snatched up by investors.
“A 1,000m2 section in Rothesay Bay in a premium street sold for $3,020,000 recently,” he says. The buyers intend to build five or six smaller houses on it, each expected to sell for upwards of $1 million.
Torbay and Northcross are both popular suburbs with investors, as land value is slightly lower than in other areas of the East Coast Bays. He says that investors are interested in buying places that they can rent out, while land banking their larger sections. These areas are also popular with new investors who have started buying post-lockdown due to the low LVRs and interest rates currently on offer.
Voss says that he has seen big equity gains for investors who decide to undertake developments and pop a few townhouses on their properties.

“It’s quite speculative at the moment, the market,” says Shah Khambatta from iFindProperty Auckland. He has seen the level of interest in the North Shore, and wider Auckland, market surge since mid-last year.
“There was a lot of investor interest post-lockdown, with the reduction to LVRs, but it really pushed in around July,” he says. Since then, it’s been hard to find bargains, as investors and owner occupiers push the prices ever upwards.
He expects this “frenzy” to ease once the 40% LVR limit is reinstated. But the market is still running hot, for now.
Khambatta says that areas such as Birkdale, Beach Haven and Glenfield are popular, slightly more affordable, suburbs for investors. But there is not much stock coming on the market as people hold on for even greater capital gains.
He is concerned about the level of “rookie” interest in property investing. “There are a lot of people who intended to invest one day who are buying now. And others who may have had one property who are adding to their portfolio.”

He says that “rookie” developers are also appearing, buying up properties with larger sections in North Shore suburbs and hoping to make a killing. “Then there are others who are buying, then putting [back] on the market in a couple of months and cashing in on the capital gains,” he says.

Find out more about investing in North Shore 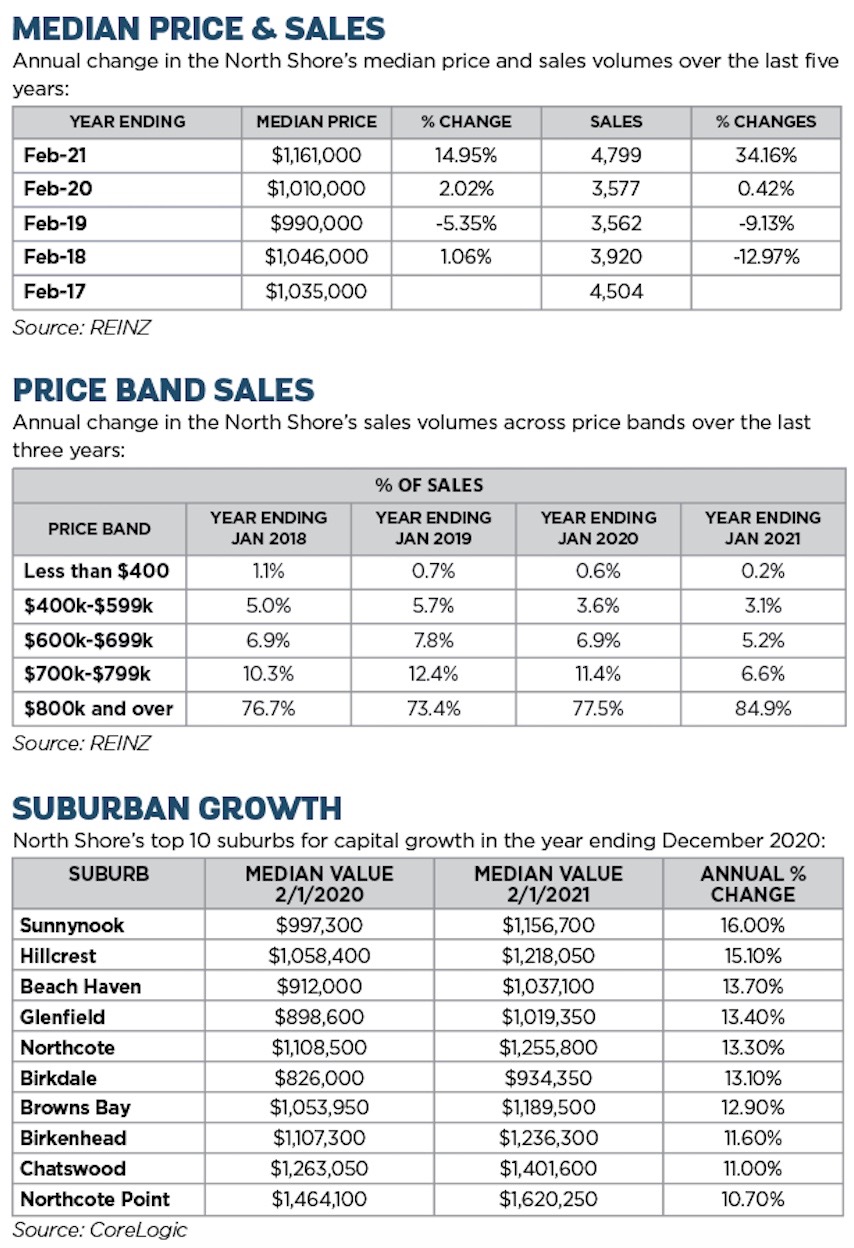