Fletcher Building opened a flash, new, high tech, prefabricated house building factory yesterday. Great things are expected of it, but Miriam Bell ponders what it means for your average investor. 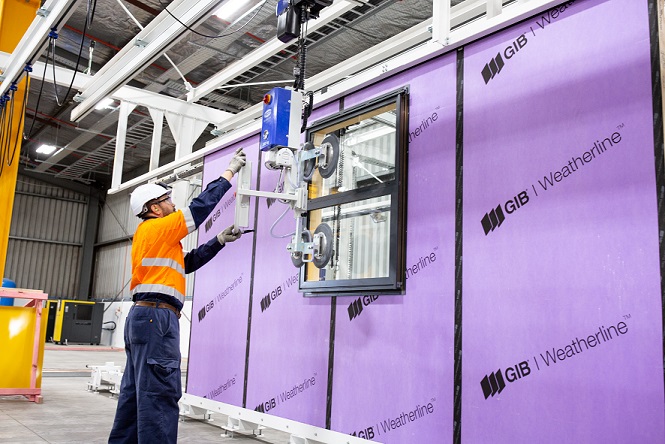 The purpose-designed, $15 million “Clever Core” facility, which is in Wiri, will be able to reduce onsite build times by 60% or from 22 weeks to six to 10 weeks.

It has the capacity to produce the core structural components for a house in as little as a day and for around 500 new homes each year.

This will be achieved by streamlining the design, consenting and manufacturing process including some state-of-the-art technology.

Fletcher Building CEO Ross Taylor said this not only significantly speeds up build times, but also enables greater quality control and significantly reduces building waste by as much as 80% per home built.

While the facility will initially support Fletcher Living developments, they plan to extend the offering to group home builders and retirement home operators in the future, he said.

“Once production is at scale, we believe it will play a pivotal role in helping the industry deliver more quality, healthy homes that Kiwis love, faster.”

Given the ongoing shortage of housing stock, the potential implications of Fletcher’s initiative has got politicians pretty excited and a strong contingent turned out for the official launch of the facility.

Woods said manufacturing houses offsite is an exciting area of innovation which has the potential to transform the building sector and increase the country’s supply of housing.

The government is making changes to streamline consent processes, but realises that to increase the pace and supply of housing it is important to work with the private sector, she says. “So we’re looking forward to more innovations like this.”

Goff said that you can’t build 21st century housing in 19th century ways and one of the ways to progress much needed housing for Auckland is via offsite building manufacture.

“We should have been doing this type of thing earlier. This facility is a win-win for the city, the community, and Fletchers.”

While the Clever Core facility is, obviously, not going to solve New Zealand’s housing problems all on its own, it will certainly help to ramp up the country’s housing manufacturing capability.

So what does this mean for your average property investor?

Well, not much on the face of it – because the Fletcher’s facility, and other similar (albeit not as big) large scale, end-to-end house building facilities, are squarely aimed at major housing development projects.

That’s why KiwiBuild representatives and retirement village developers were also a noticeable presence at the opening of the facility.

Yet, while Fletchers’ factory is not going to be producing small scale, one-off type housing products, it does have relevance for investors.

First up, any significant ramping up of housing production does impact on supply and that, in turn, has an impact on the market which should be of interest to engaged investors.

But, perhaps more importantly, it is a potent sign of how processes, technology and thinking are changing in the housing industry (as things are in industries across the board).

Let’s be clear: Fletcher’s new facility is not an industry disrupter in the mould of Uber or Airbnb. But it represents a shift in building strategies and techniques.

That shift, along with the technology involved, will filter down to smaller scale prefab companies-  and to the type of builds that many investors do: adding secondary dwellings, subdivisions and small developments.

It’s also a part of a raft of changes, new concepts and ground-breaking technology hitting the property sphere.

Some notable examples include the development of the build-to-rent sector, the emergence of property crowdfunding initiatives, and the enshrining in law of the Healthy Homes minimum standards for rental property.

And, finally, the speeches at the opening of the Fletchers’ facility highlighted another – very contemporary – trend in thinking, one which is increasingly important for companies and investment.

That trend is environmental, social and corporate governance (ESG) and it’s all about the factors used to measure the sustainability and ethical impact of an investment in a company or business.

So alongside its figures on building production and speed, Fletchers presented some attractive waste reduction figures and some socially responsible moves too.

It seems the new facility will reduce construction waste by 80%, with the amount of waste produced on site amounting to less than one rubbish bag per house in contrast to the multiple skips currently generated.

Additionally, the facility and its equipment have been designed so that no heavy lifting is required which means women are able to use it as easily as men.

While there are just two women on the floor at the moment, one of the tour guides who showed media round the facility told us they are keen to up that.

The initiative has also created 35 new jobs and many of the recruits have been employed through Fletchers Switch Up programme for first-time jobseekers.

This is relevant to investors because it is another example of how social mores and expectations within the broader community are changing and, in turn, how that is impacting on their business.

A good example here is the changing requirements for landlords, whether it’s the Healthy Homes minimum standards or tenancy law.

But not all change is bad. What is important is flexibility and adaptation: investors need to move with the times and make the most of the opportunities that come with change.

It’s also worth noting that some things don’t change.

For example, speaking at the launch, Fletcher Residential & Development chief executive Steve Evans said that while a lot of housing can be made through the offsite process, it won’t replace traditional processes.

“Offsite manufacturing stands alongside those processes, so only about 20 to 25% of Fletcher’s product will go through this facility.”

Further, as another of our guides kept emphasising, offsite manufacturing is a speedier process, but once the products are complete and onsite for construction, external factors – notably the weather – come into play.

And the vagaries of the weather, and its impact on construction, is something that never changes.

With more housing supply coming through from Fletcher's and other PreFab companies it will surely lower capital appreciation on existing housing stock, and reduce rents. There will be less of a demand for rentals. I see this as a massive game changer for investors, and potentially another headwind many investors won't be able to handle. After several years of rapid house price appreciation in main centres like Auckland, new investors who bought recently potentially could lost out BIG TIME as all this new stock comes into the market. This will benefit tenants and first home buyers only.