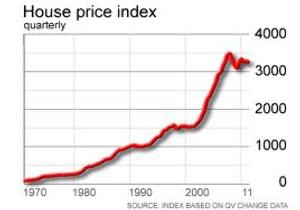 Nationwide property values continued on an upward trend in the three months to April, according to the latest QV index.

"Nationwide values have once again increased slightly in the past month, continuing the trend that has persisted for the past year," said QV valuer Glenda Whitehead.

"The marginal drop in values in March appears to have been a temporary blip. There continues to be variability across the country but slight increases in values in parts of Auckland, Wellington, Hamilton and several of the provincial centres are helping to push up nationwide values."

Whitehead said sales activity had been strong for the past few months with volumes at the highest level since 2007, citing an increase in confidence among first time buyers who are particularly active in most of the main centres.

"Sales activity will slow down a little over winter but the increased confidence in the property market is likely to carry through to spring," she said.

QV reports that values in the wider Auckland region are up 0.6% over the past three months and 5% up over last year. Values are rising fastest in the old Auckland City, 6.8% above April 2011 and 5.1% above the 2007 market peak.

"Property values are performing quite differently across what is a very large urban area," said Whitehead.

"The financial position of buyers appears to be a key driver for whether prices in suburbs are rising or remaining more stable."

Whitehead said properties in inner leafy suburbs, including old Auckland City, with values in excess of $800,000 continue to be in strong demand with buyer numbers well in excess of the relatively low level of listings.

"This imbalance continues to see sales prices climb with buyers seemingly less financially restricted and keen to outbid each other, typically at auction or through pre-auction offers," she said.

"Some of this activity is a counter-balance to a long period of inactivity which has caused pent up demand."

She said values had also risen in Te Atu Peninsula, New Lynn and Titirangi with demand outstripping listings levels in recent months for properties in the $400,000 to $550,000 range.

A better balance of supply and demand exists in other suburbs and areas where family homes can be purchased for under $400,000 are seeing a steady turnover with prices either firm or increasing marginally.

"Hillsborough, overlooking the Manukau harbour and One Tree Hill, continues to offer sizeable family homes on full sites for $500,000 to $600,000. Values in this area appear stable in recent months. Demand for these is coming from buyers who seek solid construction options that won't present any maintenance issues in the future," said Whitehead.

"Demand within suburbs on the North Shore is varied, with Hillcrest and Forest Hill remaining popular. Properties here priced in the $500,000 to $750,000 bracket are seeing strong demand and values are now slightly increasing. Sunnynook, with family homes in the $450,000 to $600,000 bracket, saw a big jump in values late last year but increases have now eased and values are steady this year."

Over the past year values in the capital have dropped then recovered, up 0.6% over the past three months and also 0.6% above April 2011.

"First home buyers are prominent and investors are starting to enter the market for multi-unit investment blocks. There is also an increase in activity in the rural lifestyle market.

"Some potential buyers are again commenting that it is difficult to find a suitable property, indicating that there is a shortage of listings in some areas. Well presented and located property in good school zones are still selling well, sometimes under multiple offer situations."

Christchurch values have been rising steadily over the past year to sit 4.8% higher and just 0.1% below the 2007 peak.

However, over the last couple of months values have first flattened then dropped back slightly.

QV said it remained too early to say whether this represents a longer term slowing down of values in Christchurch.

"Activity and demand continue to flourish in unaffected areas of Christchurch and the surrounding areas. Properties selling via auction or ‘sale by negotiation over' have been very effective as the competition is driving sale prices," said QV valuer Richard Kolff.

"Feedback from purchasers also reveals the first offer they put forward is generally their best price due to being tired of going through the process and missing out on properties. We are also seeing more evidence of people well underway with planning or building in new subdivisions."

Hamilton has seen values rise 0.5% over the last three months after several months of relative stability. Values are now up 1.7% on April 2011 but remain 10.6% below the 2007 peak.

"There has been renewed interest in the market from people who have been holding off for a few months. This has resulted in properties in the middle and upper low end of the market selling best," said QV valuer Richard Allen.

"This renewed interest in the property market has reduced the stock of properties on the market in the city and this may lead to a shortage of properties if the demand continues. Mixed economic signals on the home front including increasing unemployment and a reduced dairy payout as well as a challenging global backdrop may mean that the market flattens over the winter months."

Values in Tauranga have been trending downwards over the last few months, dropping 0.6% over the past three months. They remain 0.7% above the same time last year but 11.5% below the market peak of 2007.

"Lower end properties are receiving the most interest with first home buyers entering the market, as younger couples with smaller deposits have also been able to enter the market for the first time in years due to the Welcome Home Loans programme," said QV valuer Paul Thomas.

"The price floor for entry level properties is also now heading below $200,000 which is unheard of in Tauranga in the last four years. The remainder of the residential market is ticking over but really no more."

Values in Dunedin have fallen back 1% over the last three months after rising 4.5% in the five months prior to that. Values now sit 2.7% above a year earlier and 5.1% below the market peak.

"Demand is highest for lower valued properties with good attendance at open homes and an apparent shortage of listing. Buyers in this lower bracket appear to be a good mix of first home buyers and investors, with more outside investment being identified due to perceived affordability in the south," said QV Valuer Tim Gibson.

For the provincial centres over the past three months values have risen between 1% and 2.5% in Rotorua, Palmerston North, Queenstown Lakes and Invercargill.

Gisborne has seen values fall almost 3% in the past three months, and Napier by 1.5% while the other provincial centres have remained more or less steady.