Rents charged by residential landlords in most parts of Auckland has risen by about 3% year-on-year to hit $616.32 a week, figures to the end of March show.

The numbers were similar in most areas of the region, with Rodney, North Shore, West Auckland, Eastern Suburbs, Pakuranga and Howick, and rural Manukau and Franklin all with average rents rising between 2.91% and 3.88%.

“This movement in rental prices makes the first quarter of 2022 one of the higher quarters in recent years, but still measured in proportion to the 5-6% increases between 2014 and 2017,” says Kiri Barfoot, Barfoot & Thompson director.

“What we are seeing is a slight rebound off the back of a period of frozen and slow-moving rents during the pandemic challenges of 2020 and 2021, as well as the expected pressure on rental properties’ operating costs that are a bi-product of compliance costs, rising inflation, increasing interest rates and reduced tax deductibility.”

Only the central city and fringe had lower increases, just shy of 1.5%, but this was not expected to last over the longer term if demand began to return with renewed interest from students, short-term city renters and tourists.

South Auckland had the highest percentage increase across the region at 4.47%, however it has the third lowest average weekly rent of any area of the city at $555.21.

By size, homes at either end of the market recorded the greatest increases in average price, with one-bedroom properties attracting weekly rents 3.35% percent higher on average than last year, and four-bedroom homes attracting rents 3.84% higher. 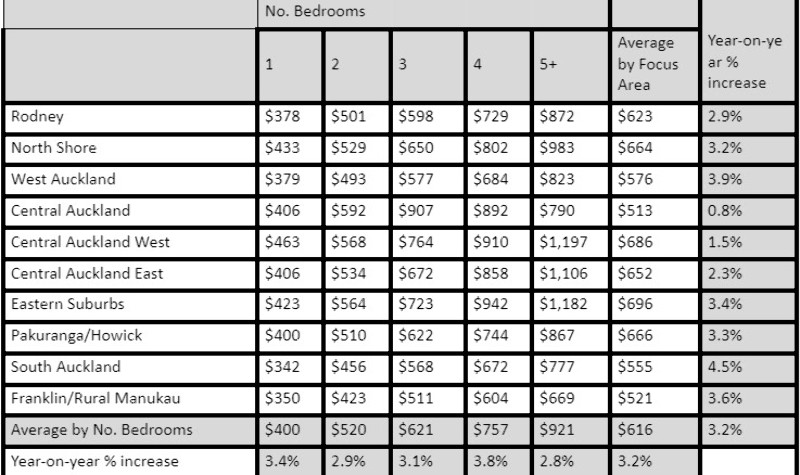