News > Property > Areas that are cheaper to buy than rent dwindling

Areas that are cheaper to buy than rent dwindling

There are still several areas of New Zealand where paying a mortgage is cheaper than renting, but a lot fewer than a year ago.

Lower Hutt, Tauranga and Tasman are some examples of areas where paying a mortgage has switched from being lower than rent a year ago to more expensive now, the latest CoreLogic research shows.

As the official cash rate increases, likely to start today, and mortgage rates continue to rise, the relative appeal of buying a property may start to dwindle.

The popularity of alternative saving options such as online investment apps hints at a broadening view in people’s long-term financial plans.

CoreLogic senior economist Kelvin Davidson says one feature of the property upswing over the past year or so has been its widespread nature.

All parts of the country have seen rapidly rising values, not just the biggest cities or other main urban areas.

“In fact, some provincial markets have seen the biggest gains, and one interesting way to look at this is the comparison of buying versus renting.”

To do this, CoreLogic has taken the median price in each area and assumed buyers have a 20% deposit, servicing that debt over 30 years at a current 2.8% mortgage rate.

It has then compared those fortnightly repayments to the median rent in each area.

“As things stand, it’s still cheaper to buy than rent in 42 parts of New Zealand.

“For example, in Rotorua, the fortnightly difference between paying a mortgage versus rent is about $206 lower,” says Davidson.

However, a year ago it was only a small handful of the most expensive parts of New Zealand where a buyer would pay more on the mortgage than rent – eg Thames Coromandel, Wellington, Queenstown and Auckland, he says.

The national difference a year ago was -$138 (ie cheaper to pay mortgage than rent).

But as values have boomed across the country and the buy-rent margin has switched from negative to positive in more areas, the national figure is now +$22.

“It’s no surprise to see that many of these areas have been at the forefront of the upswing over the past year.

“In Porirua, for example, whereas a year ago there might have been savings of about $220 per fortnight on offer to a buyer if they owned rather than rented, that figure has now tipped the other way and buying is about $90 more per fortnight.

“Tasman is another market that has seen a large shift in that buy-rent equation,” says Davidson.

And while they may also slow the rate of property price growth, values are still likely to be higher in another year’s time than they are today. 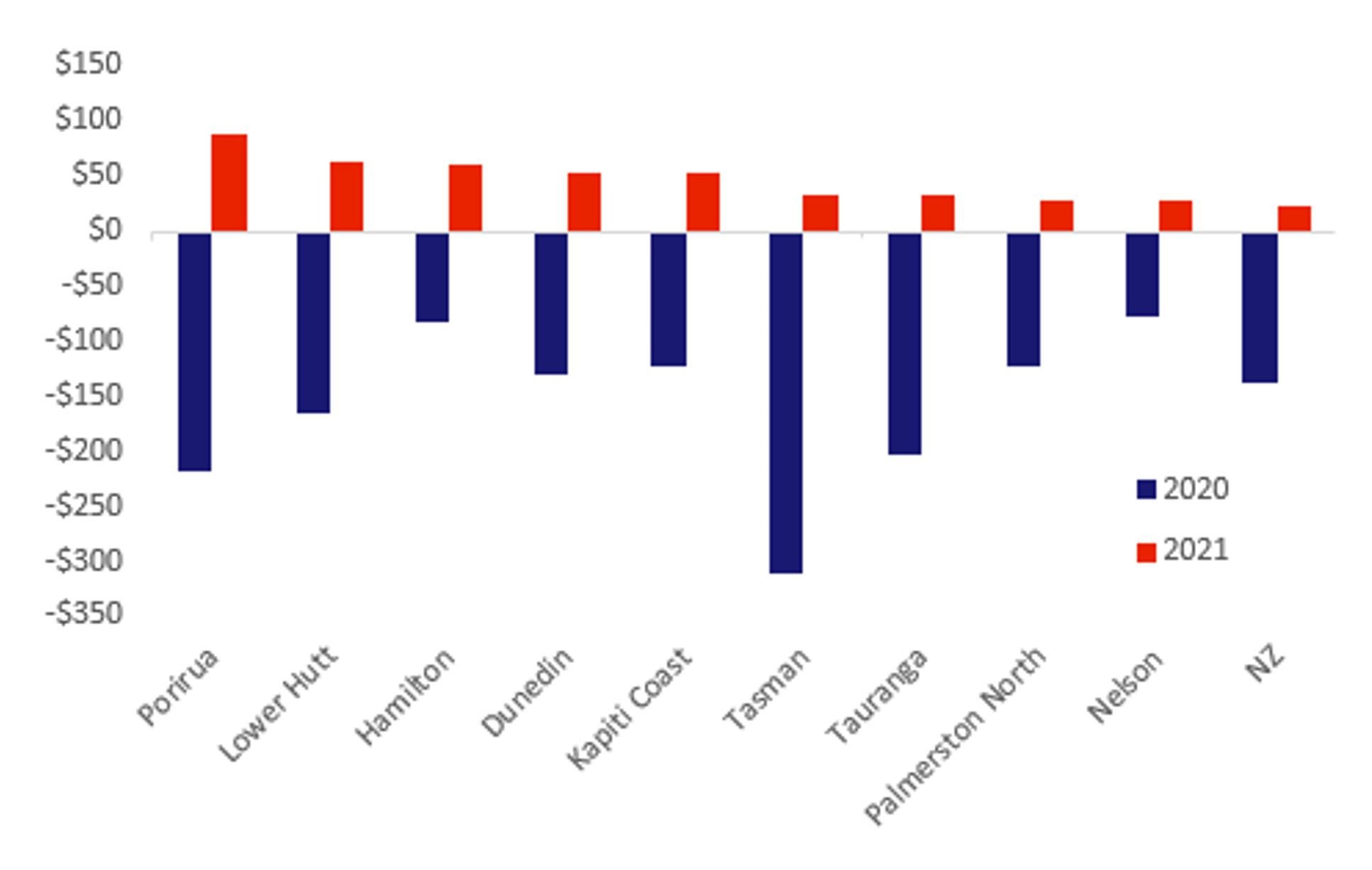