Wellington, the world’s southern-most capital and windiest city, punches above its weight for housing investment, as Sally Lindsay discovers. 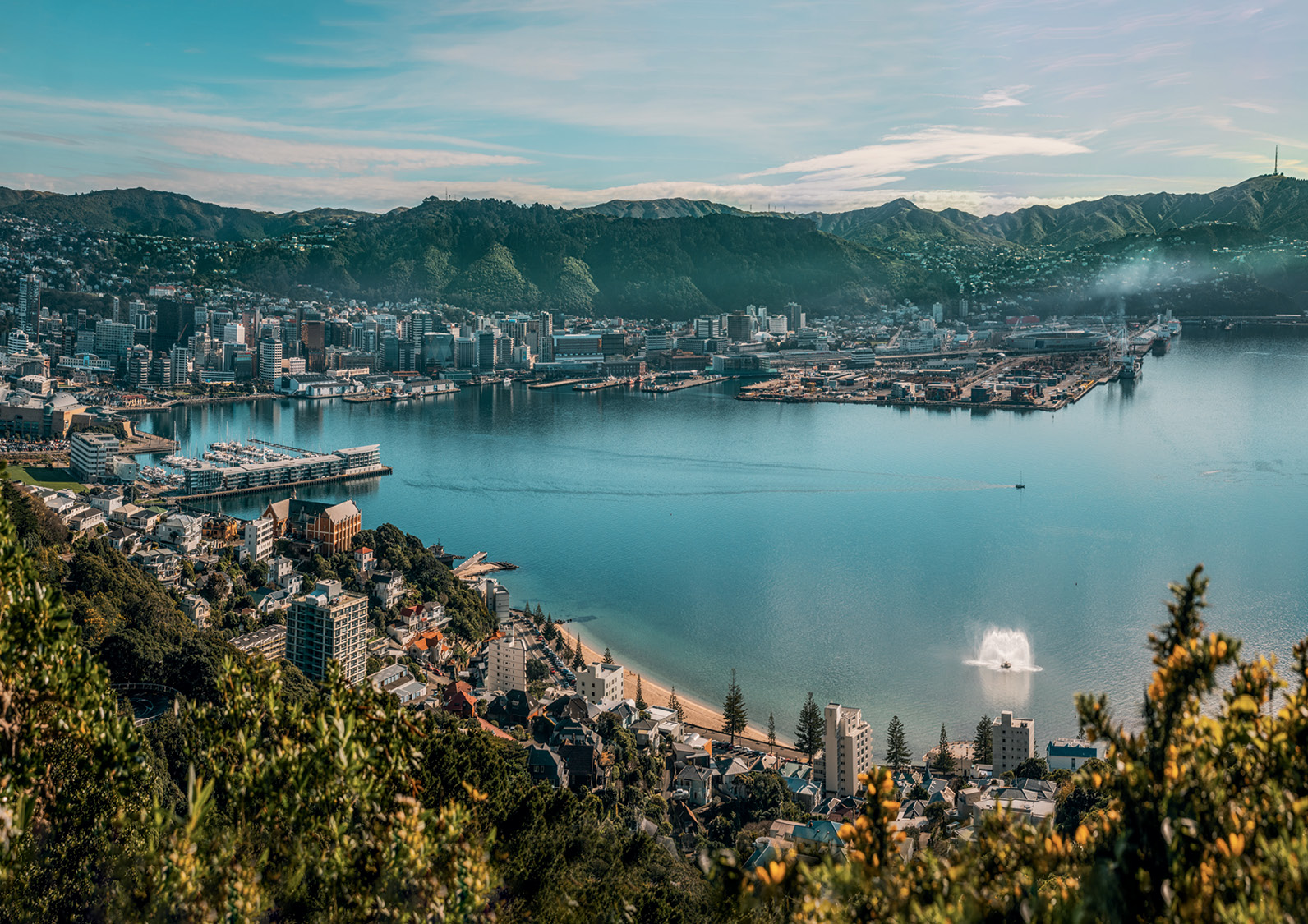 Known variously as Wellywood, the coolest little capital in the world and the country’s culinary and cultural capital, Wellington’s compact cafe-filled central city – poised between the hills and a dramatic harbour setting – offers more than its fair share of art galleries, museums, fashion and design boutiques, all within a short walk of each other.

The cityscape is one form of public art with its blend of old and new – from simple wooden colonial houses to imposing heritage buildings and post- modern architecture.

It is also renowned for its sophisticated food scene including more than 300 cafes, bars and restaurants, and claims more places to eat and drink
per capita than New York City.

The city is so compact 18,000 of its residents walk or jog to work and all Wellingtonians live within three kilometres of the sea. They also have easy access to 363 kilometres of biking and walking tracks around the city.

The housing market is also compact. Nearly 51%, or one in three, Wellington houses have doubled in value since they were bought, while one in 10 properties, or 11%, have tripled in value, a June homes.co.nz analysis revealed.

The latest CoreLogic research shows capital growth for central Wellington properties has been rising exponentially over the year to August.

NO WINTER BLUES
Although prices may have passed their peak, Tommy’s Real Estate agent Tim Clark, who specialises in Wellington Central sales, says the market is not suffering the winter blues as it often does. In a fortnight during lockdown Clark has sold 15 CBD apartments off- the-plan.

Many of the apartment developments are in earthquake strengthened and refurbished older buildings. Clark says there is plenty of demand for any new developments coming to the market from investors, young professionals, down-sizers and commuters who want to live in the city.

“While there is a lack of stock and few new projects coming to the market, prices for recent developments have been attractive for investors and owner- occupiers and I don’t see them dropping in a hurry.”

Two-bedroom apartments off-the- plan in newer buildings are selling on average for late $700,000s to $900,000. Buyers are willing to pay more and a two- bedroom off-the-plan apartment with a carpark and storage unit in a relatively new building sold recently for $1.1 million.

Clark says many apartments being sold now don’t have carparks. “Wellington’s inner-city is easy to get around and many residents don’t feel the need to have a car. The capital also has a reasonably good public transport system.”
Carparks on separate titles within apartment buildings are being sold for up to $130,000. However, Wellington City Council is discouraging the construction of new apartment blocks with carparks.

Clark says the Healthy Homes legislation and the extended bright-line test has forced Wellington Central landlords into reassessing their properties. “Some, with older properties are opting to get out of the market as it is expensive to bring their houses up to standard and those properties are mainly being sold to owner-occupiers, while others are having to weigh up where they sit in the bright-line timeframes and whether they are subject to them.” He says new developments are appealing to investors because only the five-year bright-line test applies and they will probably not be subject to the winding back of mortgage interest tax deductibility.

Because Wellington is compact and has challenging topography, developers are finding it difficult to source land for new developments. “They are always on the lookout,” says Clark. “It will take a year before any new developments come to the market.”

Apartment developments are also now spreading out beyond the CBD. Wellington’s spatial plan allows for up to six-storey apartment blocks next to arterial routes in Thorndon and Mt Victoria.

FEW PROPERTIES FOR RENT
As much as the housing market is tight in Wellington Central, so is the rental market. The rental market area is compact and properties in remote areas are rare.

People are as happy to rent on the Kapiti Coast as they are in Wellington as long as the rent suits their pocket, says Anita Smith, Comprende Property Management’s owner and senior property manager.

Comprende had just 12 properties listed for rent in the CBD and fringe suburbs a few weeks ago. “It has been this way for months,” says Smith.

The company has 600 properties on its books – 55% of its stock is Wellington CBD apartments and it usually has an average of 40 properties listed for rent. Most are rented within 15 days of being advertised.

Smith says most landlords don’t have unrealistic expectations. “They know the market, how it performs and what markets rents are.”

Quite a few landlords have long- standing good tenants and they will only increase rent incrementally every two years. They do not have reservations about taking under-market rents. When the tenancy ends the property is usually re-let at market rent.

The most popular property type in Wellington CBD is a two-bedroom apartment and in the fringe suburbs a three-bedroom house. “One-bedroom apartments mainly rented by young professional couples, in the 25-35 age range, go out the door as soon as they come in,” says Smith.

During last year’s lockdown government and industry workers, who rent from Comprende, took up offers of rent reduction. It didn’t happen during the recent lockdown, but the company checked in with all its landlords and sent
letters reminding tenants that if they were facing hardship to let the company know so the landlord could be advised.

While the rental agency is listing new stock regularly, Smith says investor buying has plateaued. “Many landlords are concerned about the Healthy Homes standards compliance and some are struggling to bring their older properties up to scratch because of the cost involved. For this reason, some have sold and others have taken the opportunity to get out of the rental market while sale prices are high.”

A one-bedroom apartment on average rents for $400-$500 a week; a two- bedroom apartment $500-$550 a week; new townhouses in the fringe suburbs rent on average for $750 a week and a three-bedroom house for $850 upwards.
Smith has noticed tenants becoming choosier because they are paying up to half of their income in rent. “About 25 years ago rent was a third of income.

“Tenants want a well maintained and presented property and the company specifically takes on only clients with those types of properties. They get a better tenant and better rent.”

She says recent headlines about the shortage of Wellington rental properties don’t tell the full story. “The younger generation find it difficult to rent because they don’t have landlord references or they have a pet. Admittedly there is a lot of competition for properties among those that can afford to pay the rent. If there are any hiccups in qualifying for a property, it pushes potential renters out as the properties are snapped up quickly by those who meet the criteria.”

SITTING ON THEIR HANDS

“Many investors are sitting on their hands and property investment activity has declined,” he says.

“Those selling find there is still competition from buyers for properties and prices are firm. At the moment there is just a little bit of a gap in demand from investors, while owner-occupiers have taken up the slack in the market.

Ambrose says there is still investor interest but caution until the Government changes to mortgage interest deductibility are clearly spelt out. “The number of changes to regulations for property investors this year have been swift and bewildering for many. Investors are taking a breather until they know the definite rules they will need to follow.”

He has noticed a shift in investors’ buying intentions. New builds are on their radar and demand is outstripping supply.

Ambrose says the double income stream apartments are proving popular in Wellington and are selling at good prices. Investors can borrow against them if they are 40-50m2 and bigger. “While they are small apartments investors and other buyers wanting to get on to the property ladder find them an attractive proposition, although most don’t come with carparks,” he says.

Wellington central is a good place to invest, says Ambrose. “It has more potential for capital growth but investors have to be prepared for lower yields. They are sitting at low 4% to high
5%, depending on the condition of the property and its renovation and subdivision potential.

“Smart investors know yields are more important than capital gains. Maintaining a good yield is vital to servicing a mortgage.

“Prices for properties anywhere near the inner-city don’t sell for less than $1 million and that is hard to make stack up as a rental with any sort of decent yield.”

Ambrose prefers investing in Wellington Central property near the university and hospital because there is always good demand for rentals near these two institutions, in any city. He buys in these high demand areas to ease any fluctuating demand for rentals and increases in rents. ■ 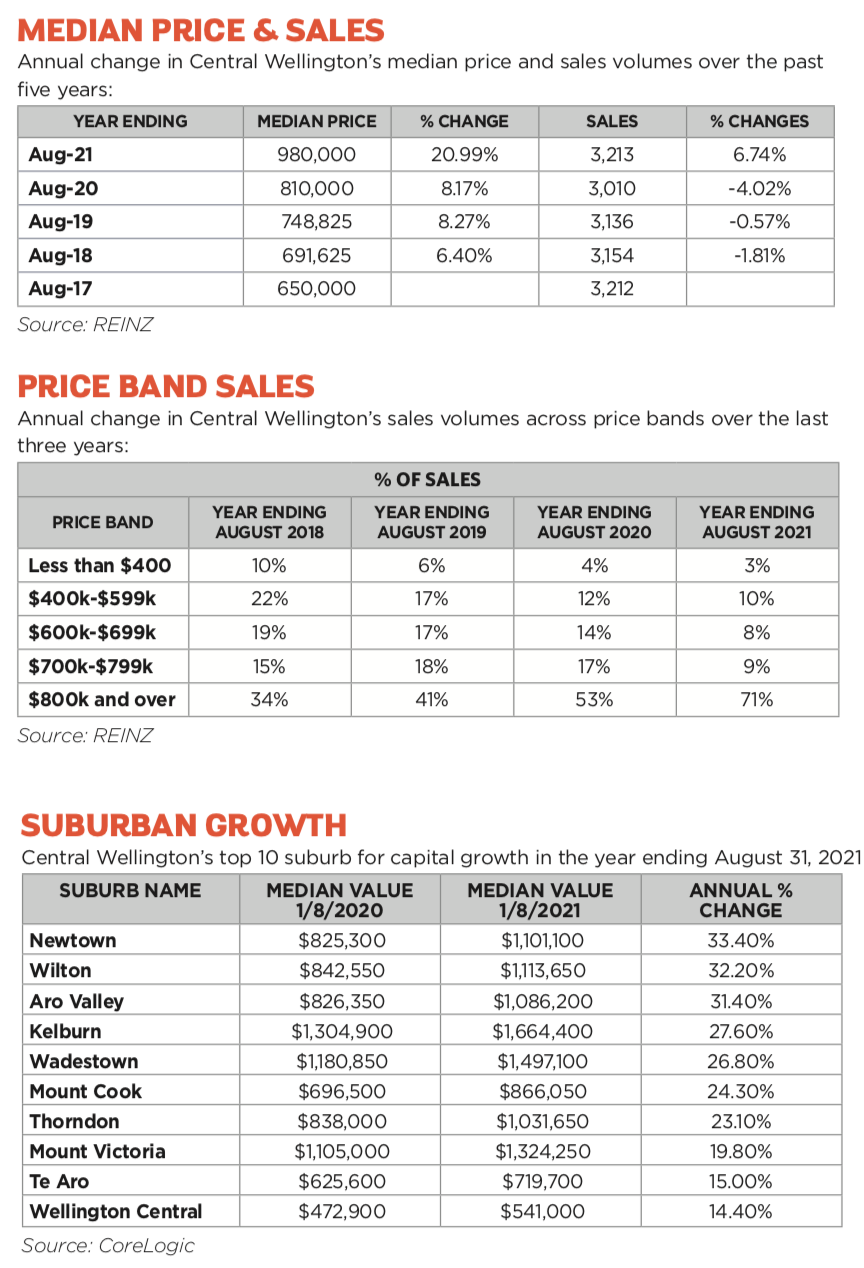