Last year Wealth Morning interviewed CAP, a nationwide group dealing with debt and poverty –housing cost pressures were found to be the key cause of deprivation.

Many people after paying rent, and even mortgages, are left with barely anything to live on – while New Zealand’s homelessness is the worst in the OECD. 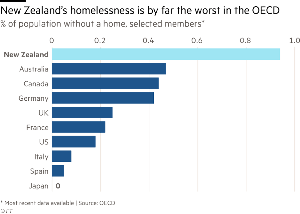 It is not only a housing issue. It is an investment issue, where capital is not channelled to economic activity, but to speculation on rental housing.

How did a progressive country fail so badly?

The market has failed to build enough homes because the system is broken. The Government benefits from the building of homes (GST, payroll taxes, and so on). But local government which controls much of it, receives little upside. And all the downside of “nimbyism”.

Councils’ planning focus seems dedicated to ring-fencing cities, trying to stop them from spreading. This implies density must increase, but New Zealanders are unused to apartment or other high-density living.

On top of this, poor economic management is rife. Over the past two decades, governments appear to have achieved significant GDP growth via migration. Yet compared to another developed country of similar population – Ireland – New Zealand has averaged net migration rates of more than 3x. Yet Ireland’s construction sector appears to be 3x larger.

Is there a solution?

There is little point highlighting a problem if you don’t have a solution. Those who abetted the problem will not be held to account. And for the (still) majority of people who own homes, some more than one, they have done well.

Capital gains tax (CGT) will not solve the problem. There is already limited CGT in the form of the bright-line test. Instead, CGT could risk the hoarding of housing as people avoid what amounts to a “tax when you sell”.

A deemed rate of return tax possibly makes more sense. Along the lines of what Susan St John of Auckland University has suggested. I would tweak the suggestion to focus on housing beyond primary residences and consider taxing that at a “fair dividend rate”. Perhaps 5% on the gross value.

This would sharpen investors’ minds on the real return of housing, while broadening the tax base to deal with the economic imbalance we face.

Yet, the levers of taxation may still not resolve the key underlying problem: More demand for homes, particularly in certain locations and of a certain type, than the country has or can produce.

One of the problems with the maligned KiwiBuild programme is that it focuses on building homes without correct analysis of the path to ownership.

Charitable programmes such as that offered by Habitat for Humanity do exactly this. Habitat is addressing market failure with a “rent-to-buy” type model. Families pay affordable rents on their home. Then may have the opportunity to refinance and buy it once they are able to do so.

Only the Government can fix the system

We’ve looked at this from multiple angles. Tweak the tax. Remove the RMA. It might all help.

But it comes down to the disconnect between central and local government. It is central government that can ultimately lead large-scale infrastructure to facilitate development, while addressing skill shortages in building and trades.

The government did it post-World War II. Tens of thousands of homes were built across whole new suburbs. Skilled tradesmen were brought in or trained to build the new homes and even pre-cut houses from Austria were imported when local materials ran out.

This provided decades of affordable housing. Now it needs to start again with quality rental housing beyond the lumbering bureaucracy of the existing state housing system.

Vonovia is one the largest commercial providers of housing in Europe, owning more 400,000 dwellings across Germany, Sweden and Austria.

The company’s share price has doubled since 2015. It pays investors a yearly dividend of about 3%. It’s return on equity of about 14%, and compared to other businesses, was barely affected by Covid-19.

It is a resilient and defensive enterprise. Investors currently pay a 50% premium on tangible asset value to own this stock.

My point? Renting is an affordable option for people across Germany because of companies such as Vonovia.

New Zealand could benefit from a large-scale builder of affordable rental property. But it needs a commercial, market focus.

If the Government could kick-start such an operation, the company could then be floated on the starved NZX, allowing investors to buy a stake. It could be similar to the successfully managed float of power companies, which offered 49% of their shares to investors.

Investors in a housing scheme could then contribute to the building and rental of homes in a scaled and potentially profitable way.

While the private sector is also working on “build-to-rent” options, the impediments of central versus local government, the RMA, skill shortages and infrastructure deficits – it seems Wellington needs to spearhead things in a more ambitious way.

When thousands of medium-density dwellings offering affordable rents are rolled out, rents across the market could fall. This might encourage many marginal landlords to sell and invest in more productive areas – bringing more homes to the market and improving affordability.

Stop the home owners from Auckland/Tauranga & Wellington from using their equity on the family home to buy investment properties elsewhere in NZ, they are shutting everyone out of the property market, also the quantity or retuning NZ'rs and immigrants coming into this country is staggering and they have to live somewhere, we were at a home unit open home a couple of weeks ago, it was advertised as a deadline sale with no early offers entered into, there was a younger couple there from Auckland demanding to submit an early offer on the spot, the selling agent explained to them that it was not an available option, as we left a full scale argument with raised voices was beginning, we declined to hang around, but we did learn that 2 bedroom units are not only an option for the elderly to downsize to,but the younger ones who don't want land to look after are now starting to dominate that market, several of our recent viewings have been sold to younger childless couples, there is no easy fix to housing of the population, Immigration/Retuning NZ'rs, thousands of School leavers year in year out accumulating and so it goes on, it is not a government problem to fix! it is up to each individual person to address, but!!!! Councils need to free up land to build on!!! for example the Town of Hastings has no land available to build on NONE!!! Hastings is full!!! sound pathetic!! yes it is!!!!

Snag is that in NZ the landlord is held to be responsible for far more than in the case of Europe. This means that here residential landlording is a high workload low return business. Ma and Pa landlords can make it pay by doing a lot of the work themselves. However if run commercially there would be nil return on the investment . This is the reason why we dont have large scale residential landlording in NZ.

I have read with interest the item in today's Landlord News - written by Simon Angelo. Yes - his comments are correct - but he should include the full picture. 1. The housing situation in places like Germany came about due to the virtual annihilation of most buildings in Germany due to a small bit of activity between 1939 and 1945 - ie: the Second World War and the bombing of most cities and many towns. This sort of made the availability of land for building quite convenient...............there was lots of it.......... 2. The cunning German industry saw an opportunity to make lots of money and persuaded the government that it would be good if tenants had to supply their own kitchens as these are what wears out and gets damaged. This called for the tenants to purchase at retail prices rather than the building company buy at wholesale price - more money for Siemens........... 3. But wait - theres more. If tenants had endless tenancy then they would have to redecorate every ten years and when they vacated (by death or simply moving out) they either had to remove the kitchen or sell it to the next tenant. 4. And theres more - now many tenancy's require the tenant to supply their own bathroom. They are made as a complete unit and they come as a complete unit ready for connection of services when installed. Bathrooms probably cause more building damage than kitchens which is why its now becoming common to be the tenants responsibility. Yes - renting in places like Germany sounds just lovely - but the promoters of the concept should be honest about the conditions. And yes - if there was such a programme in NZ I would invest. But the article sets out the very simple solution and its been done in NZ before - BUILD MORE BLOODY HOUSES.

I have had Habitat held out to me as a good example many times over the years. Firstly they are a non tax paying charity so any income (rent) that is paid by their tenants is not taxed. They let the houses to their clients and if the tenants do not carry through with the deal they walk away with nothing. That little nest egg gets recycled to the new applicants but comes from other families personal disasters is not a good model to hold up as an wonderful example. In our town the city council gives them assistance with development levies also. I would be happy to grant my tenants a 33% discount on their rent if I could have the same tax treatment. This would not make me a good generous landlord all it would do would give me an advantage over other landlords permitting me to choose only the best tenants on offer.

Why does nobody talk about this auction system which is used to sell houses? It's absurd a house having its price skyrocketed because an auction. Forbid this practice, and the prices will go down. #forbidhouseauction