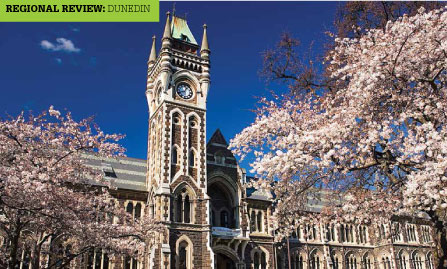 Heritage, wildlife, spectacular scenery and impressive growth: no wonder Dunedin considers itself one of the world’s best small cities. Its diverse economy spans education, manufacturing, healthcare, technology, tourism and agriculture – and its population has been increasing rapidly.

“We have all the things you need for a city: a university, a hospital, an airport, and the best stadium in New Zealand,” says Miles Rapley of Bayleys Dunedin. “There are lovely destination places, beautiful beaches, good coffee and you’re close to skiing and the lakes. There are seals, penguins and albatross. We’re the driest major city in New Zealand. It takes 10 minutes to go anywhere and it’s easy to make friends – Dunedin has a lot of good things going for it.”

For property investors, Dunedin has traditionally been a place where houses were affordable and yields were high. That equation has been tipped on its head over the past five years as house prices have surged dramatically – Dunedin’s average house value is higher than Christchurch’s for the first time since records began in 1990.

“Dunedin’s a great place, where you can buy a bloody nice house for under $1 million. It means first home buyers and retirees can have spare change in their pockets,” says Rapley. “You get a lot of bang for your buck.”

Demand and supply out of balance

The biggest challenge facing anyone wanting to invest in Dunedin is the city’s serious shortage of housing stock. The lack of supply is the main driver of price rises in recent years. Rapley says when he started in his job 12 years ago you could expect to see an average of 1,000 local property listings at any time. Now that number is down to 250.

Prices are up around 20% on a year ago and there’s a sense of urgency for buyers that hasn’t been diminished by lockdown or winter, he says. Recently he’s been selling “plenty” of properties in the $1 million to $2 million range, which was once the top end of the market, as well as a few that have sold for more than $2 million, which is a new level for the city.

Rents have risen, but not at the same speed as prices, so yields are lower than in the past. Kathryn Seque, president of the Otago Property Investors’ Association, has been watching the market for several years in the hopes of buying a bargain. So far, no luck.

Another reason locals are being outbid is that out-of-town investors are an important feature of the market, says Rory Donovan-Stumbles, director of DPM Group: “We’ve been operating for three years and we’ve seen massive organic growth on the back of off-shore investors.

"For instance, we have probably 10 landlords based in Melbourne who are looking for returns and they just can’t get them in Australia. It’s a win-win for us, because those investors buy inner-city apartments and executive homes, they’re willing to spend on compliance, and they get the best tenants.”

The shortage of homes is being compounded by an increase in the population. People are regularly moving to Dunedin from other parts of New Zealand, particularly Auckland and Christchurch, says Ashley Stevenson, director at Click Property Management:

“There’s a good mix of people moving here, usually for jobs – because the rents are lower, if they can get the income, they’re quids in. And you can get most places in 15 minutes, which is quite a change if you’re used to driving an hour or an hour-and-a-half to work each day.”

Mana Property Management director Maree McGregor says the market has come through lockdown almost completely unscathed. Right now, good rentals attract multiple applications within a day or two, and only the most dated stock tends to be vacant: “What’s in demand is warm, dry and newish homes. Anything that feels new – not just fresh paint and new carpet – is easy to rent.”

In fact, the pandemic may actually have contributed to Dunedin’s growing population, says Aleks Dahlberg, CEO and co-founder of KITT Property Management. He says the higher cost of living in bigger cities means Kiwis are looking around for alternatives, and “the Wellington of the South Island” has a lot to recommend it.

“There’s been a lot of economic development – a huge amount of construction happening with the hospital and retirement homes being built. And there’s a big manufacturing scene, a software and tech scene growing quite fast. It’s drawing a lot of people from the cities who are looking for opportunities.”

What may have more of an impact than the pandemic are the recent changes to tenancy rules. The new rule of rolling fixed-term tenancies onto periodic ones will be an adjustment because the local market tends to operate on a calendar year cycle.

“It’s going to be new territory for all of us,” says James Elliott, COO at KITT. “There will be more rentals throughout the year and the market should be more dynamic. We’ll need to be talking to tenants about their plans.”

And the gradual increase in standards for rentals is eliminating the notorious Dunedin student rental culture of paying cheap rates for large, uninsulated houses in terrible condition. This is an underrated factor in the value increase of recent years, says Rapley:

“The average price was so cheap because the hundred-year-plus cottages brought the average down – they were old, cold and bugggered. Now they’re being knocked down or done up.”

“Buy as new as possible”

Those hundred-year-old villas can look stunning in the listing, but don’t fall in love with a pretty face, warns McGregor: “Local people would rather have newer homes. Buy as new inside as possible, or something that will be easy to renovate – we recently had to put up scaffolding to install a kitchen extractor fan into a house on a hill. And make sure you time your renovation or tenancy to be vacant in January/February.”

New family homes, three or four bedrooms, in a better area like Mosgiigel or St Clair, will cost between $700,000 and $900,000, says Rapley, and rents will start at around $700 a week. A two-bedroom standalone property in a good area will rent for $500 to $600 a week. At the other end of the market, a two-bedroom unit in a less sought-after area will cost around $350,000 unrenovated, and once it’s renovated will rent for the early $400s.

McGregor likes Caversham for new investors, which she says is up-and-coming – look for opportunities to add on a second rental stream with an extra granny flat or garage conversion. You might also like to consider South Dunedin, an area once avoided by homeowners and risk-averse investors, but recently come good.

A typical three-bedroom standalone home in South Dunedin will rent for around $430 a week, while a four-bedroom home, fully renovated, will get around $630.

Family homes are the “bread and butter” of investment properties in Dunedin, says Stevenson. “If it’s a good, sunny, three-bedroom home it’s always going to rent, from the late 400s up to the 500s per week.”

But with the market so frothy, finding a bargain is nearly impossible. With international students not currently allowed into New Zealand, the student market – particularly for studio apartments – is flatter than it might otherwise have been.

“The place you make money is by taking a contrarian view, and people are worried about students never coming back,” says Elliott. “I think student apartments have the potential to be good buying right now.”

Dahlberg agrees with his colleague that “student properties are a good pick for a cashflow investor who has the optimism that the market will return. Depending on the area and the type of property, they’ll often get higher rent, and the studios do really well with foreign students.”

Although tourism is an important facet of the local economy, Dunedin is much less dependent on it than Queenstown and Wanaka. It has some major projects underway that suggest its momentum will continue, including New Zealand’s biggest-ever hospital rebuild with a $1.4 billion price tag, being built on the site of the old Cadbury factory.

In July, the Government announced a $31.7 million development at the Otago Polytechnic that would help train the workforce to build the hospital. The Government also earmarked $260 million of its post-Covid-19 infrastructure fund to be spent in Otago, while the Dunedin City Council is pushing for an inland port and suburban rail service to be developed.

“People are attracted to Dunedin and what it’s doing,” says Donovan-Stumbles. “The hospital, the university, the investment funnelling back into the city, the lower cost of living and the good jobs. There’s a general optimism. People are starting to see that Dunedin is not just a small town – it’s time to take it seriously.”