Wairarapa on the move

A tight rental market and low sales stock mean Wairarapa’s property market is on the up, writes Joanna Jefferies. 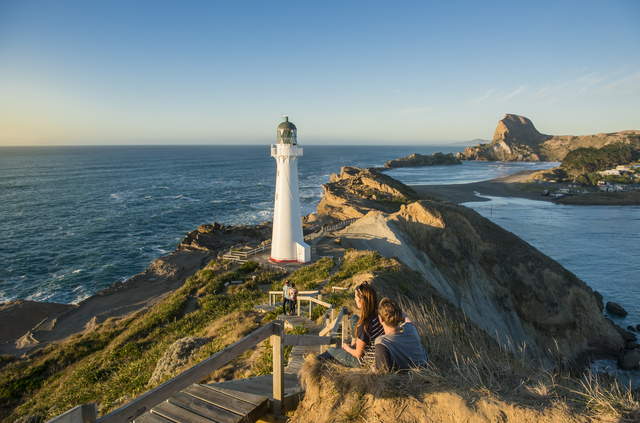 The Wairarapa region has long been one of New Zealand’s best-kept secrets. An hour north of Wellington, the area combines beautifully rugged coastal scenery with fantastic wineries and charming towns. Although some Kiwis would still be hard-pressed to pinpoint it on a map, the Wairarapa is shifting from hidden gem to sought-after hotspot.

Its economy has grown strongly in the past five years, thanks mainly to its successful primary sector, high-value domestic tourism and the ripple effect from Wellington’s booming economy and housing market.

Comprised of South Wairarapa, Masterton and Carterton districts, Wairarapa is also benefiting from improved infrastructure that’s making it easier to access. As a result, it’s become a more attractive home-buying destination for Wellington workers priced out of the capital housing market.

That has led to a huge surge in house values across the region; in February this year, asking prices for Wairarapa properties at Realestate.co.nz were up 26.6% compared to February 2019 – an all-time- high for the region and the highest year-on-year growth of any area in New Zealand.

“It’s a beautiful spot in the country and people are discovering that,” says Will Alexander, general manager, property management at Property Brokers. “I think it was undervalued before, and the penny’s finally dropped. With Transmission Gulley about to finish, that will also open up more options. I think we’re seeing some speculation in the area, with investors looking to the future and seeing that [Wairarapa] will be more accessible to Wellington.”

First home buyers have been out in droves, says Andy Scott, principal at Professionals Patrick and Scott, Masterton. They’ve been snapping up many of the more affordable properties that investors might normally buy, but rising prices are causing a problem for those hoping to access the First Home Grant. The regional price cap of $400,000 for existing properties might once have been ample, but now buyers are struggling to find a house that’s within their budget, says Scott.

“We’re definitely seeing a big increase in enquiries – I don’t know how much exactly but it feels like 30% to 50% more than normal levels, and a lot of enquiry from first home buyers. There’s still some enquiry from investors, too. There’s been a lot of talk about investors selling up but I haven’t seen any influx of existing rentals coming onto the market.”

The main issue for buyers is a lack of listings, a problem seen across New Zealand in 2020. Scott says his sales team had their best July on record: “If we had 1,000 listings we’d sell them all, but we only have about five – well, more than five, but we’d like a lot more!”

Tenant demand for rentals was already outstripping supply and that imbalance is being intensified by owner-occupiers buying rentals that come onto the market, says Alexander. The number of bonds being lodged is flat and tenants are staying longer because rentals are so scarce: Wairarapa tenancies average 33 months, compared to the national average of 26 months, according to Property Brokers data.

On August 15, there were only 18 rental listings on Trade Me across South Wairarapa, Masterton and Carterton districts. With slim pickings, landlords are in a position to choose from a selection of excellent, high-quality tenants. Rent arrears are very low, he adds, and typically tenants take good care of their property.

“We’re seeing increased rents, longer tenancies, a vacancy rate at less than one per cent1% and high demand from tenants,” says Alexander. “All the markers are there to indicate a very strong market.”

Masterton investor Peter James has lived in the UK and in other parts of New Zealand, but says Wairarapa is his favourite spot.:

“I like the fact that it’s a little bit off the beaten track, and the people are friendly. It’s quite like the South Island when it comes to the scenery. I like the hot summers and cold winters, and it’s relatively dry. You’ve got everything you need here. It’s big enough to be interesting and liveable without being a big city like Auckland or Wellington.”

James owns Lambert Engineering and decided in August 2018 to buy a building for his business to operate from – and both have been performing very well since then. Turnover has doubled on the business, and the building has doubled in value; plus a recent rent review indicated that the rent had increased by $7,000 a year. In July he had someone walk in wanting to purchase the business (he’s thinking about it).

“This is a good place to be and I’m happy with my investment – if I had more money and I liked to borrow, I would invest more. But I’m a bit old-fashioned; if I can’t afford it, I don’t buy it.”

The typical rental in Wairarapa is a staple of the classic Kiwi buy-and-hold portfolio: the three-bedroom standalone house on a quarter-acre section. A good example of that sort of property can be purchased for the mid $400,000s, says Scott, who believes Masterton probably offers the best rental returns in the district right now.

“The west side is the so-called ‘better’ area of Masterton, but I’d go for the east side – it’s a little lower in value with a better return and you’ll still get a good tenant. We can still get a seven per cent7% return on a lot of properties, but there’s a huge shortage. If you want to buy, you’ll probably be competing with five other offers on the table. Have your finances in order and present a clean and tidy offer at the best level you can go.”

The rent on a three-bedroom property will be between $420 and $550 per week, says Alexander, who agrees that a family home is always a good choice for Wairarapa investors. Look carefully at how much work will need to be done on an existing property to bring it up to the Healthy Homes standards, he advises.

With thousands of rentals and a limited number of suppliers and contractors, having insulation and heat pumps installed may take much longer than normal as the deadline for compliance approaches.

Alexander recommends looking for properties near transport hubs and good schools, and spend some money making your rental good enough to withstand the everyday demands of a long-term tenant, because that’s what you’ll probably get.

Although older houses dominate the stock, there has been some development, adds Scott, so investors looking for something low-maintenance can find it – at a price:

“There are quite significant subdivisions opening up, with 200-odd sections coming on the market shortly. There are also new builds out there, but they’re going for upwards of $600,000.”

A severe case of undersupply for listings

Housing stock is down across New Zealand, but the shortage is more severe in Wairarapa than almost anywhere else, according to Realestate.co.nz data. Compared to July 2019, housing stock in July 2020 was down 46.4% - – only Taranaki saw a bigger drop of 48.5%.

This is the equivalent of only 120 houses for sale in the region, with only 70 new properties listed in the month of July for a population of around 45,000 (Stats NZ). It would take just seven weeks of normal trading activity to exhaust all the stock in the market.

Some investors will be listing their properties in the region, says Alexander, but he believes it would be a mistake to attribute this to either coronavirus or impending tenancy law changes.

“This is the first time in a long time that provincial New Zealand is seeing strong capital gains and people are thinking, ‘I’ll take a bit of that action’. Landlords may have been sitting on properties for a long time and they’ve done their dash, so they’re realising their gains. It’s not anything other than part of the property cycle.”

Well-positioned for the post-coronavirus recovery

Buyers getting in now may be paying a premium, but the Wairarapa region is perhaps one of the best-positioned in New Zealand to make a vigorous recovery after the coronavirus lockdowns. Paymark data for July 2020 showed that the Wairarapa region was one of 10 areas of the country where accommodation spending was up on July 2019 (along with Bay of Plenty, Gisborne, Hawke’s Bay, Taranaki, Whanganui, Marlborough, Nelson, West Coast and South Canterbury).

It’s been building a reputation as a domestic tourism location for many years and isn’t particularly reliant on international travellers, as well as being underpinned by a thriving primary sector and a still-steady export from the wine trade.

Overall, the region’s reputation is growing, its popularity is on the rise and its economy is burgeoning. Of course, none of this comes as any surprise to the locals.

“This is a nice place to be,” says Scott. “The beaches, wide open spaces, great parks, good hospital and good schools. If you want to buy a house here, my advice would be ‘Get in the queue’.”