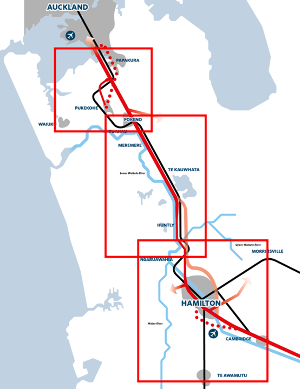 Investors looking for future growth hotspots should keep an eye on the “Hamilton-Auckland Corridor” after New Zealand’s first urban growth partnership was signed on Thursday.

Central Government, Auckland Council and Waikato councils and local mana whenua have committed to a partnership which will strategically manage the development of the area between Auckland and Hamilton.

The agreement, which was signed at a meeting of the Future Proof Implementation Committee, is intended to co-ordinate the building of housing, transport and other infrastructure and services.

It will cover the area ranging from Papakura in the north of Auckland, through the Franklin district, to Cambridge and Te Awamutu in the south Waikato.

This area is set to see significant population, economic and jobs growth over the next 30-50 years.

According to Future Proof documents, the Hamilton, Waipa and Waikato sub-region’s population alone is predicted to double over the next 50 years.

The goal of the new partnership is to align development in the area with three key transport networks – the Waikato and Waipa Rivers, the Main Trunk Line and the Waikato Expressway.

Urban Development Minister Phil Twyford says the Hamilton-Auckland Corridor initiative is an example of how to improve the way New Zealand’s towns and cities grow and develop.

The partnership’s work programme will look at initiatives aimed at strengthening the Hamilton-Auckland Corridor connections, he says.

These include blue-green connections like walking and cycling trails along the Waikato River to the Manukau harbour, new intercity rapid rail services and a new mass transit network for the emerging Hamilton-Waikato metropolitan area.

“Work is underway on a Cabinet-mandated business case for a modern, rapid rail line connecting Auckland and Hamilton that would unite two of the country’s largest labour markets,” Twyford adds.

Currently, a Hamilton to Auckland passenger rail service is scheduled to get started around March or April of next year.

For Māori Development and Associate Housing Minister Nanaia Mahuta, a priority will be to unlock Hamilton’s growth potential.

“With its outstanding transport connections, plentiful land and the key role it plays in the region’s export economy, Hamilton is poised to become an even higher growth but affordable urban centre.”

She says the partnership aims to unlock the significant growth potential in Southern Auckland and the Hamilton-Waikato metropolitan area, underpinned by new rapid and commuter rail connections.

“The transport network will direct where much-needed housing will be developed and connect our people to growing employment opportunities in both the Waikato and Auckland.”