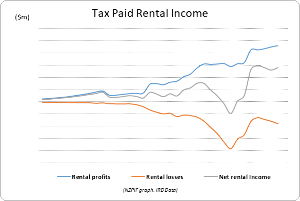 The NZ Property Investors Federation has produced research which shows that property investors pay their fair share of tax...

Westpac Economist, Dominick Stephens, says that property is more lightly taxed in NZ compared to other assets. He quotes a Tax Working Group study to make this claim.

However financial consultants Morgan Wallace found large errors in the Group’s study and concluded that rental property is actually taxed more than other assets.

Officials agreed with the Wallace Morgan report. They said that if the study had treated other assets with a capital growth component the same way they treated rental property, then rental property would actually have a higher marginal effective tax rate because of local government rates. They told the NZ Property Investors' Federation (NZPIF) that their study "is probably less well suited to comparing taxes across different real investments".

At a recent meeting with the NZPIF, the Tax Working Group agreed that rental property is not undertaxed as their background report had claimed.

Stephens has also said that rental property has tax advantages over home buyers and that this has led to a reduction in the rate of home ownership since the early 1990's.

Claiming expenses against taxable income is a tax law that exists for all. Rental property pays tax on gross income less expenses just like every other business or investment. Home buyers do not have an income stream from which to deduct their expenses. When buying a home they receive the benefit of accommodation.

The two situations are completely different. Just because a rental provider can claim expenses from their rental income, this does not make buying a property easier for them compared to a home buyer.

Stephens says that if the tax system caused prices to increase then the tax system will reduce prices as well. Yet other countries with a capital gains tax have also had high levels of house price growth. Why would New Zealand be different, especially when owner occupied housing is exempt?

Regarding tax paid, IRD data shows that the rental property industry pays tax on approximately $1.5b of net rental income each year. The attached graph show this from the latest data for the year ended March 2016.

Stephens is right that a capital gains tax will increase rental prices, but it will not lower house prices.