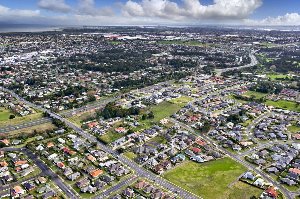 In terms of volume, Manukau City finished the year with a 0.6% decrease – 322 properties sold, compared to 324 a year earlier, while Papakura District was down by 7.8%, December 2016 to December 2017 with 64 and 59 sold respectively. It’s worth noting that volume in Papakura District was down a huge 38.5% on the previous month, November, when 96 properties were sold.

Much of this is in keeping with the observation that December in New Zealand is traditionally a quiet month, with vendors and buyers alike focussing their attention on Christmas and summer holidays.

However, as the new year finally kicks in seriously, local agents are noticing a flurry of activity in the southern suburbs and, while prices are evening out, confidence is staying steady.

Kerry Burridge and her husband Ian McWilliam have been active investors in the South Auckland market and particularly in Otahuhu and Manurewa for many years. “There’s no way we’d be selling at the moment because all of our properties are doing well. We very rarely have a vacancy and we’re getting good rents – plus the capital gains,” says Burridge.

Burridge suspects that so-called “mum and dad” investors, who have perhaps only one or two properties may be feeling a little nervous right now. “They will be wondering if the market has peaked, and are probably worried that the Labour government will bring in capital gains and land taxes. Plus, there are the new rules around insulation coming in soon, which will possibly affect them.”

Thomson says South Auckland really doesn’t seem quite as inflated as places closer to the Auckland CBD so, contrary to media perception, some properties really are still selling for less than $500,000.

“In most of the suburbs you can still find a two-bedroom home or unit for $400,000. Wiri is an area that we’re tipping to be on the up, with significant developments such as the $25 million Ramada Hotel and the nearby Pacific Gardens.”

Thomson says that some new builds in the area are being sold off the plan in the $700,000s, while established properties are selling in the high $500,000s to low $600,000s region. “In terms of yields, Wiri properties would garner approximately 5%, while the rest of South Auckland can range from 4-6%.”

He says, too, that properties close to Manukau CBD can offer particularly good returns right now while Mangere is also increasingly popular - because of its proximity to Auckland Airport and the new South Western Motorway. “There is significant demand for two-bedroom apartments and units around Manukau and Papatoetoe, as people streamline their needs - perhaps in order to save for their own first property.

Angela Fahey of Fahey Property Managers is another optimist when it comes to the South Auckland market. “In the inner Auckland suburbs, like Epsom and Mount Eden, there are ‘For Rent’ signs going up all over the neighbourhood, but you’ll rarely see that in South Auckland where demand never eases.”

Fahey says that one area where she’s been seeing lots of activity recently is Takanini and she knows of several potential investors who’ve been looking there recently. “The problem remains in getting equity in those markets, though, and I know that many landlords in South Auckland are taking a hit and absorbing growing costs themselves.”

Sean Dunn, general manager at The Rent Shop is also seeing an increased demand for two-bedders and says that well-presented, well-priced properties are easy to rent. “There are some owners who have bought into the media hype and want too much for their homes but those ones do tend to move more slowly.”

He says that he’s seeing a particular uptick in demand in Papatoetoe. “But overall, almost anything in South Auckland is a good investment at the moment.

Meanwhile, Stu East, general manager at Mike Greer Homes, South Auckland, reports that while many of their new builds are targeted at first home buyers, there had been significant interest from landlords in some smaller units the company had built in Papakura. “Price really dominates the market around here, so we focus on putting lots of features into relatively small houses. A three-bedroom terrace would be around $900,000,” he says.

When NZ Property Investor last spoke to Cameron Stewart in mid-2016, he was intending to slow down on trades and concentrate more on running his existing portfolio. But recently he’s been lured back, by the thrill of making money quickly, and in the last few months he’s been buying and selling again.

As a new father, living on a lifestyle block in Maramarua, Stewart is motivated by his desire to buy a farm one day. He is planning to focus especially on his property in Mangere, which he bought for $700,000, in 2012, and which is now worth $1 million. It is a four-bedroom house with a self-contained unit on it already and he plans to add at least two more. “It’s all about seeing the potential for development,” he says.

Stewart believes that Manurewa and Otahuhu are still undervalued and he’s bought and sold a lot in those vicinities over the years. “People don’t always realise that Otahuhu is so close to Sylvia Park.”

In general he intends to stay active in the South Auckland market, which he says will only continue to grow. “They’re putting in lots of new infrastructure for a market that includes middle-classes and workers,” he says.

Kerry Burridge says that she thinks most professional landlords will look at their returns and their still-strong rental streams and see no reason to get out of South Auckland, at this stage, and every reason to get in, as long as they’re realistic about what’s involved.

She and her husband are waiting and watching before buying again. She says that when the right time does come, they certainly have no intention of investing anywhere other than South Auckland.
“In the long run, it still feels good to us.”