Rental listings up, interest down: Trade Me 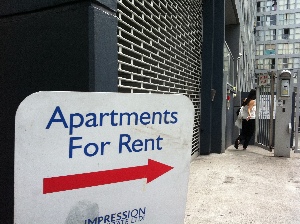 It’s not good news for landlords right across New Zealand in the latest Trade Me Property analysis.

Head of Trade Me Property Brendon Skipper said the national scenario in the last quarter of 2012 was similar to that of the September quarter.

Listings were up and interest was down in most regions.

"The average number of inquiries per listing echoes last quarter’s findings, down by 5% compared to the same period in 2011. As a result, the asking price for rentals is up by only 3%, considerably below QV’s recently reported 5.7%increase in house prices.”

He said interest from prospective tenants was weak particularly in Auckland City, where it was down by 28% in the CBD and down 22% in Mt Eden.

"A lot of landlords outside Christchurch are wrestling over-supplied rental markets, and may need to drop asking rents when they get back from the New Year break to lure tenants. The exception here will be those with student-friendly properties in university towns like Dunedin and Palmerston North as the annual flat-hunting missions get under way."

Skipper said the Christchurch rental market continued to "do its own thing" and remained at odds with the rest of the country. Listings are down 18% on the same time a year ago,  the average level of inquiry is up 22% and rents are up 26%.

By comparison, Skipper said the number of live listings in the website’s “for sale” category was flat compared to the same period last year, down 2%, while the level of inquiry from prospective buyers was up 13%.

"The combination of strong competition amongst buyers and a low supply of well-priced listings may force a lot of buyers back into the rental market," Skipper said. "Auckland is one to continue to keep an eye on here - there is nothing to suggest prices will abate any time soon."

On 14 January 2013 at 9:44 pm nancy said:
This is not a new phenomenon. Every year in the last 2 months of the year, listings numbers on Trademe goes up sharply. But come January they go down again. Demand in January has been very strong so far. Skipper is trying to make a mountain out of a molehill.