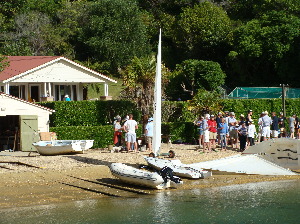 Holiday home-owners who only rent their baches out for a few nights a year will feel the sting of changes announced in this year's Budget.

Budget 2012 tightened the rules around holiday homes,  as well as private planes and boats. The amount of tax deduction able to be claimed on baches will now have to be worked out with a formula: The number of rented nights, divided by the total number of nights the bach is used, produces the portion of deductibility.

But Real Estate Institute chief executive Helen O'Sullivan did not think it would make much difference to property prices. The tax breaks were nice to have, she said, but not the reason people bought holiday homes.

Lesley Preston, of Bachcare, said the changes were positive for her business.  "People who are serious about renting will need to go to a serious organisation. And those renting will be serious about doing it, which will lift the standard of homes available."

She said the baches on her books were regularly rented,  so her clients would not be affected heavily. But some would need to think about when they used their homes themselves,

"To get the number of nights up, they'll need to think about when the rental demand is there. That might mean not using the bach themselves all summer, for example."

He said there was more information that would come out in a couple of months about the technical detail required. The changes are not part of the general Budget legislation package.

"I think relative to the Government agenda of collecting more tax in that area, the change is appropriate."